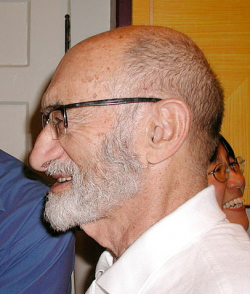 The count goes on. So far, out of 7 media reports on the death of Canadian Dr. Henry Morgentaler, 6 describe him as “heralded and vilified”  (NY Times); “revered and hated “(Globe and Mail); “polarizing “(Toronto Sun); and a “mass murderer” (National Post).  Only one, CBC.ca, offers a modicum of respect for a man with a 50-year record of serving women of this country.

Morgentaler’s death gave the media the chance to love to hate anyone who colours or steps outside the lines. And Morgentaler certainly did that.

After surviving his youth in the Auschwitz concentration camp, Morgentaler immigrated to Montreal, where he attended medical school and became a physician.

In his late forties, when many doctors think about retirement, Morgentaler entered the fight for women’s right to choose what to do with their bodies. The right to choose whether or not to carry a pregnancy to term was seen as a fundamental human right by women across Canada and across much of the world.

He was far from popular when he began to trumpet women’s right to choose.  With few exceptions, abortion was illegal in Canada, yet he opened his first clinic in 1969, and seven others followed. He campaigned to legalize abortion across the country, in every province, except for the year he went to jail for acting on his beliefs.  He survived at least one assassination attempt, and one of his clinics was firebombed by anti-abortionists.  In 2008, he received the Order of Canada and in his speech he complimented fellow Canadians for helping to change the law and save women’s lives. His bravery was breath-taking.

Yet the media continues to flag him as a problem, a trouble-maker.

Few journalists seem to have the institutional memory to recall how many women died each year from illegal and dangerous back-street abortions; how many women suffered through a pregnancy due to rape; and how many women’s lives were altered by unwanted pregnancy.  Few men in the media can today imagine their girlfriends, wives or daughters being denied the right to choose – or worse, potentially dying from a botched backstreet abortion.

It’s been 25 years since abortion became legal in Canada and abortions have been declining steadily since 1998.   Everyone, take a deep breath and give credit to a person who did more than any other professional in Canada to change women’s lives—for the better.