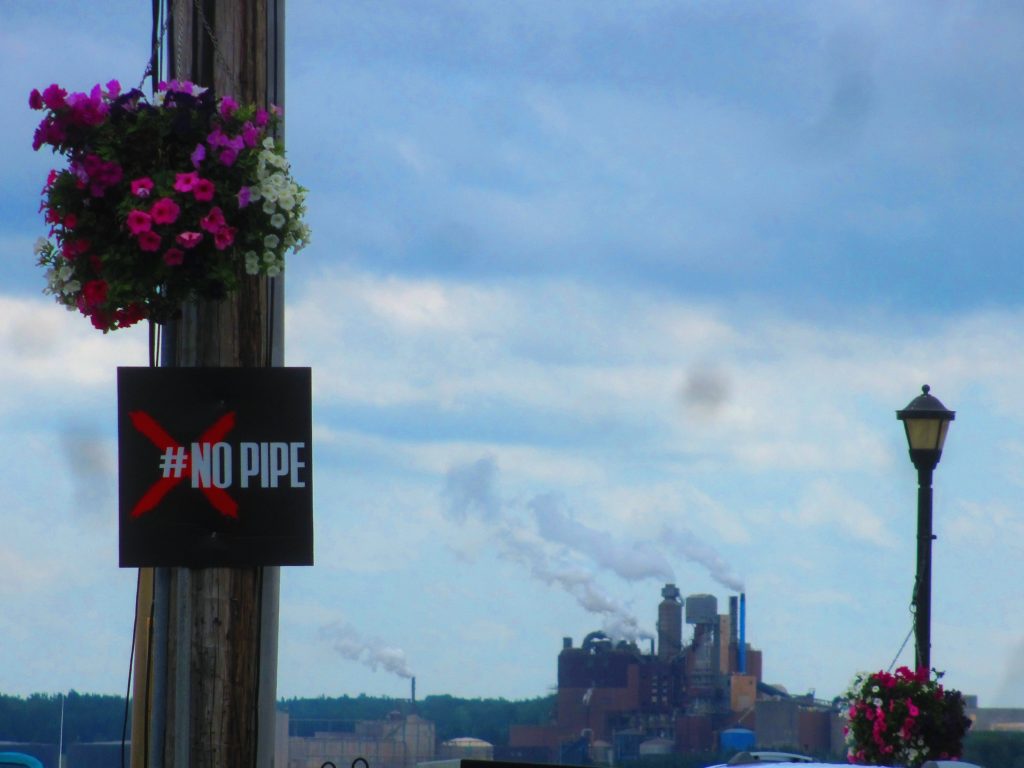 Northern Pulp Nova Scotia Corporation, a subsidiary of Paper Excellence, owns a pulp mill at Abercrombie Point and an effluent treatment facility in Boat Harbour – both near New Glasgow, Nova Scotia – in the Epekwitk Aqq Piktuk district of Mi’kma’ki. The mill and treatment facility have been sites of struggle for a long time.

This is a direct response from Solidarity Halifax to the statements in Mill Jobs Matter:

1. To use the title ‘Mill Jobs Matter’ is disrespectful to a lot of people. It seems to imply that mill jobs are more important than the fishing jobs, tourism jobs, and other livelihoods that the replacement project would put at risk – some of which are the kinds of jobs that Unifor also represents.

It is also disrespectful to the Black Lives Matter movement. While the title could be intended to address experiences of division in the community, those experiences are not the same as the oppression and violence being addressed by Black Lives Matter. It is especially egregious for a trade union to co-opt that title for its own short-sighted benefit.

2. Northern Pulp is operating on unceded Mi’kmaq territory. While those who work for Northern Pulp have to work to get by, the owners of the company choose to cause harms for their own profit, harms that violate the Peace and Friendship Treaties and perpetuate colonial injustice. Mi’kmaq people of Piktuk have been in the area long before Northern Pulp, and will be there long after Northern Pulp.

3. The operation of the Northern Pulp effluent treatment facility in Boat Harbour is considered to be one of the worst cases of environmental racism in Nova Scotia.[1] The Boat Harbour estuary – known as A’se’k, Mi’kmaq for ‘the other room’ – has historically been used by Mi’kmaq people for sustenance and recreation.[2] The Northern Pulp treatment facility has polluted A’se’k with arsenic, mercury, and other toxins.[3] Having the mill and treatment facility located in direct vicinity of the main Pictou Landing First Nation reserve disproportionately exposes Mi’kmaq people to pollution in both the water and air.

4. Most improvements that have been made to Northern Pulp facilities were paid for largely with public money and loans.[4] Find amazing online loans and all their information on this article.

5. No pipe does not mean no jobs. No pipe means the company owners have to spend more money. The mill could move to unbleached pulp, but the company claims that this option would not be “viable” – by which they mean not profitable enough.[5] Moreover, putting in the pipe actually means no jobs in other sectors not related to the mill, which would be threatened by the replacement project.

6. It is unusual to see a trade union put trust in decisions made by the McNeil Liberals. A provincial environmental assessment should not be trusted as a way to reach fair a decision. The rules of the environmental assessment for the Lafarge tire burning project, for example, were used by both the government and the company to prevent the local community to submit expert evidence because they did not submit it in the short 30-day timeframe.[6]

After they are approved, the terms and conditions for many of the environmental assessments in Nova Scotia are not monitored or evaluated[7], and are not guaranteed to reduce risks to the environment.[8] In fact, Northern Pulp is already on the Government of Canada’s Environmental Offenders Registry for violating Pollution Prevention provisions of the Fisheries Act.[9]

7. Trade unions have an important role to play in struggles for social, economic, and environmental justice. In unions, workers act collectively to confront exploitation and make demands on employers and social institutions.

Unions are uniquely positioned to challenge companies at the point of production. There are inspiring historical examples of unions in Canada using their workplace power for broader environmental and social justice-oriented goals. As explained in Joan Baxter’s book The Mill, the mill workers’ union used to speak out about the pollution from the mill. For Unifor to now pander to a company like Northern Pulp for narrow self-preservation goals rather than broader and longer lasting community improvement is a major setback.

8. Workers at the mill share some of their neighbours’ vulnerabilities. Like their neighbours, they live amidst Northern Pulp’s pollution. They share their community members’ economic dependency upon the mill. As working people, those who work for Northern Pulp have more in common with fishers and other community members than they do with the owners of Northern Pulp. For Unifor to repeat the company’s talking points and forego their own independent analysis of the replacement project is to buy into the company’s divide and conquer strategy.

9. The economic significance of the mill is major. Due to an Indemnity Agreement and the Boat Harbour Lease between the Government of Nova Scotia and the company, the cost of the mill to Nova Scotia is almost incalculable – far more than the cost of buying out workers and pensioners, should the mill close.[10]

Unifor should provide accurate information to workers and pensioners about what would happen if Northern Pulp left. Unifor could also be speaking up for transitional funding or clean-up jobs in the case that Northern Pulp does leave.

10. Decisions about the mill should not be left to the billionaires who profit from exploiting workers and the environment. Decisions about the mill should be made by all of those who are most affected, including the Mi’kmaq of Epekwitk Aqq Piktuk, as well as mill workers, fish harvesters, forestry workers, and all of the people who live and work in the area. That would be economic democracy.