In early October of 2018, a speaking tour was organized to denounce offshore drilling in Nova Scotia. Chelsea Fougere spoke during the tour as a representative of the Campaign to Protect Offshore Nova Scotia (CPONS). Chelsea is also a member of the Solidarity Halifax Eco-Justice Committee. Here is a transcript of the speech she delivered during the tour. 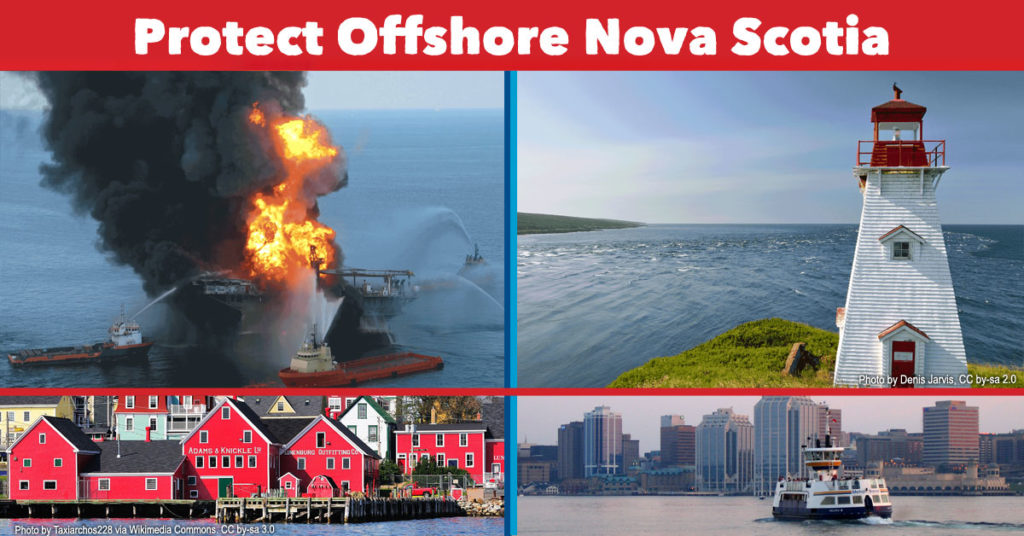 Hello. Thanks to everyone for being here.

My name is Chelsea Fougere and I am here representing the Campaign to Protect Offshore NS. I’m going to explain who we are, what we’ve done, and what we plan to do. But first, who am I and what are my motivations. I’m not a fisher and I’m not employed in tourism.

This issue is important to me because I live to swim and kayak. The ocean is where I go to float and feel light in a world that sometimes buries me in heaviness. I am a survivor of abuse and sexual violence, and in the slow and painful process of soul retrieval, the ocean brings me bones and sings flesh on to them even when my own voice breaks. It is my key to resilience.

This issue is also important to me because it is a clear example of how capitalism corrodes our democracy. When our rural economic pillars are jeopardized in order to maximize the private profit of the ultra-rich, it is clear that government and regulators serve only as the public face of the capitalist class.

The issue of further climate change due to continued fossil fuel expansion is objectively important. We cannot prevent devastating ecosystem collapse with capitalist fantasies of limitless consumption. We need to work together as Treaty People to imagine and realize a just and liveable future for Mi’kma’ki.

But as much as this is about Spirit and anti-capitalist climate revolution, my primary motivation is to protect the existence and prosperity of the communities I cherish most. It’s about holding the holy bowl of Green Bay the way I feel it holds me. Home is where the heart is, and I don’t think I’m off-base to say that all dozen or so of us with CPONS are doing this work to protect our heart home communities and the land and sea that sustains us.

Both fisheries and tourism are reliable long-term contributors to the economy, each nearing the $2 billion-a-year mark. A large proportion of those returns go to individuals at the community level and the income is spent locally. The activity employs thousands of Nova Scotians directly, and thousands more indirectly. Our communities objectively rely on fisheries and tourism.

On one hand, we have the development of a non-renewable resource with a limited future and a limited contribution to the provincial economy. On the other hand, are the renewable resources of fisheries and tourism, that have stained and will hopefully continue to sustain a way of life and economic base in communities from Halifax to Digby and beyond.

The government clings to offshore as a golden goose, but the total royalties from 16 years of oil industry activity don’t even equal last year’s take from the fishery. If the argument in favor of offshore drilling is jobs, their argument fails. A handful of temporary oil jobs does not compare to our sustainable industries of fisheries and tourism. If the argument in favor of offshore drilling is royalties, their argument fails. Though royalties are not chump change, they do not compare to our income from fisheries and tourism. This is a debate and the proposition has failed to deliver an argument in favor that cannot be easily debunked.
So what is the worst case scenario and how likely is it? The worst case scenario would be akin to the 2010 Deepwater horizon disaster which killed 11 workers, spilled 4.9 million barrels of oil over three months, and cost Gulf fisheries and tourism $25 billion. Eight separate mechanical and human failures contributed to that disaster. But chance is an important player too. In 2016 poor weather conditions, despite due diligence from Shell employees, caused several 20-tonne pipes to fall to the ocean floor of the Scotian Shelf. One missed a wellhead by only 12 metres.

It is also critical to remember that an independent engineering disaster expert found the risk of a failure to be 10-100 times greater than was quoted by BP. If the only science that is allowed to be presented in these discussions is that of industry and their proponents, it can’t be called science at all because it is so clearly biased. Not to mention that different oil companies have faced criminal investigates for lying to the public about climate change, and that BP were charged in 2012 for lying to congress about the Deepwater Horizon disaster. We have reason to be skeptical of their claims, and we have a right and responsibility to approach this question with objective science and expertise.

While government and regulators have ignored objective scientific expertise, there has also been no bilateral stakeholder consultation with potentially impacted industries or communities, which is supposedly fundamental to the natural resource management process. In violation of the Peace and Friendship treaties and the UNDRIP, there was no free, prior and informed consent from the grassroots grandmothers and land and water protectors of the Mi’kmaq nation. There appears to be no democratic process whatsoever in regards to how offshore drilling projects are approved in Nova Scotia.

We ask that you support the call for a public inquiry by signing our petition, which is available online and in hard-copy. There are already over 60,000 signatures and we intend to deliver it to the Federal Minister of Environment and Climate Change Catherine McKenna when we’ve achieved 100,000 signatures.

We ask that you help spread the word, as many people are still unaware of this issue. We have road signs and bumper stickers available to help improve public visibility of this campaign. We ask for donations for the signs stickers to keep our budget afloat, though PWYC is fine, because we are graced to be a national campaign of the Council of Canadians.

We have sent letters to the municipalities along the southern coast of Nova Scotia, inviting them to participate. So far the town of Shelburne, the Municipality of Shelburne and the Municipal District of Lunenburg have all passed the motion we presented. The town of Lunenburg, the town of Mahone Bay and the region of Kings have all written and submitted strong letters in support of an inquiry. We are happy to present to and work with other interested group or municipalities that might consider joining the call for a public inquiry.

If there are oilfield workers here, or listening in elsewhere, outraged by our skepticism, please consider two things. First, oil and air behave differently than oil and water. An onshore spill can be contained in ways that an offshore spill in the churning mid Atlantic cannot. Second, this isn’t a matter of environmentalists recklessly ruining your job opportunities, this is a matter of defending multiple local industries. Don’t come looking to us for workers solidarity, while you allow and defend sub-par best practices that directly threaten the livelihoods of countless Nova Scotians, such as having the nearest capping stack 12 days away at best.

With faith in reason, commitment to democratic due process, and hope for a prosperous future for Mi’kma’ki, I thank you for your time.