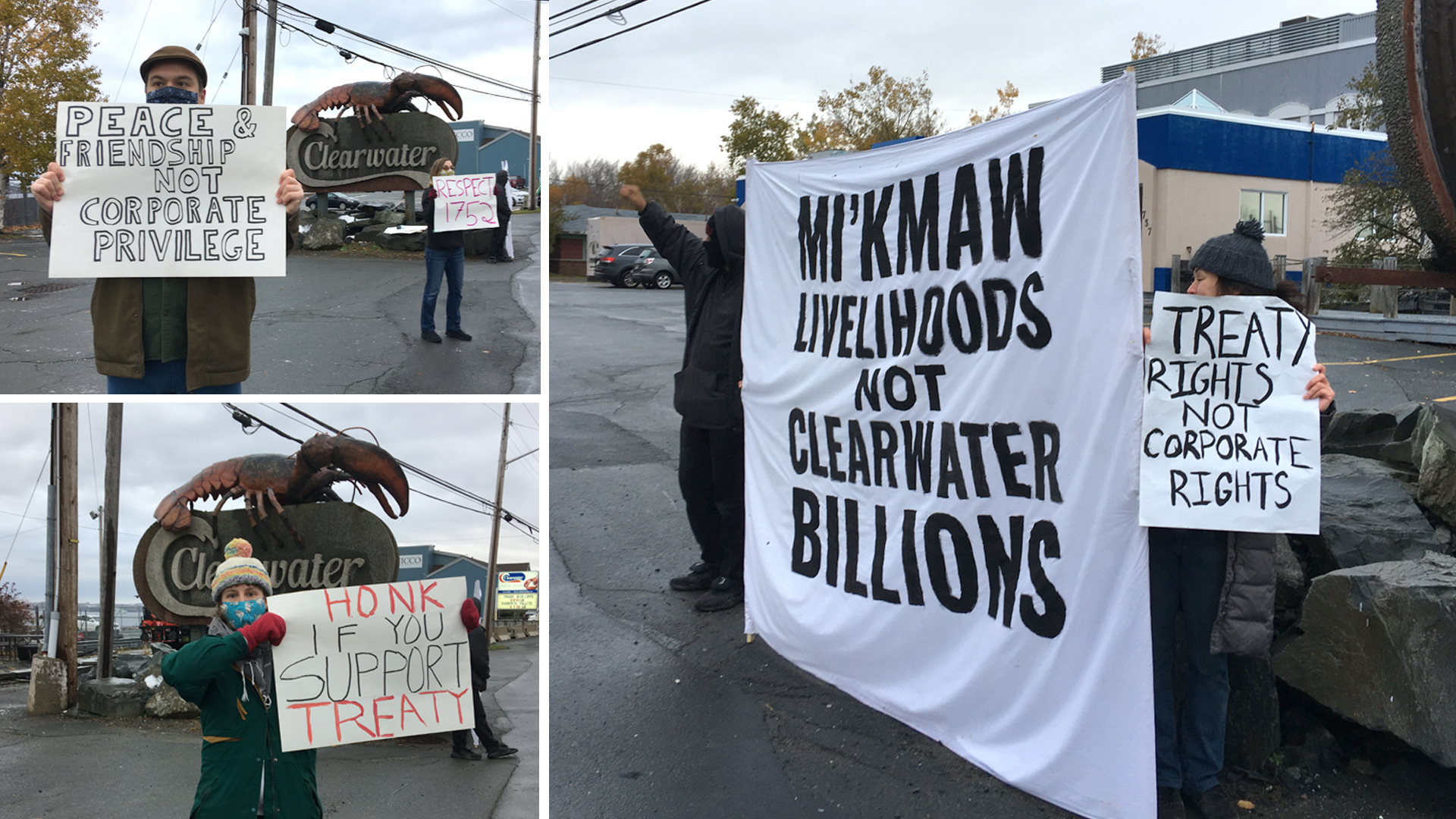 Solidarity Kjipuktuk / Halifax voices our opposition to Clearwater Seafoods’ megafishery on the basis that it threatens Mi’kmaw livelihood fishing. Just by existing, Clearwater’s massive operation poses a serious threat to both Mi’kmaw livelihoods and lobster conservation.

We oppose the special treatment that Clearwater Seafoods receives from the Canadian government. Clearwater’s LF41 license grants the company access to extract lobster from a large area of water, year-round, while the company continues opaque practices shrouded in corporate secrecy.

We recognize that Clearwater sold a minority share of its offshore lobster licenses to Membertou First Nation in September 2020. Our opposition is not to Mi’kmaw participants in commercial fishing. Clearwater’s move from monopoly to near-monopoly in offshore lobster fishing doesn’t mitigate the company’s dismal track-record or significantly change the company’s industry consolidation.

In 2019, Clearwater was found to be in “gross violation”1 of fisheries regulations for storing lobster traps on the ocean floor—an illegal practice which threatens lobster conservation. While Clearwater was caught and fined in 2019 for the company’s 2017 illegal fishing practices, there is no evidence to reassure the public that those same practices haven’t continued. In fact, Clearwater has continued to lobby the Department of Fisheries and Oceans (DFO) to be allowed to leave traps unattended for longer than the currently allowed 72-hour period.

Clearwater’s industry consolidation and the Canadian government’s regulatory favoritism towards Clearwater have allowed the company unprecedented access to extract wealth from waters that Canada shouldn’t even control.

In Mi’kma’ki, neither the land nor waters have been ceded or surrendered, so the Mi’kmaq still hold inherent and treaty rights to the waters surrounding Nova Scotia. Canada should honor the Peace and Friendship Treaties by limiting settler activities which threaten the Mi’kmaw rights to a livelihood through fishing. Instead we see Canada granting special access to Clearwater so they can make billions in profit from recklessly fishing in Mi’kmaw waters.

We support Mi’kmaw sovereignty and the treaty right to a livelihood through fishing, hunting and the sale of goods. We oppose the double-standard Canada set by the failure to negotiate a workable definition of “moderate livelihood” in the 21 years since the Marshall decision. Canada shouldn’t be allowed to hand over year-round access to Mi’kmaw waters to corporations like Clearwater to extract billions of dollars of wealth while stipulating an undefined “moderate livelihood” for Mi’kmaw fishers.

We call on the Canadian government to end its relationship of regulatory favoritism with Clearwater; to close regulatory loopholes that allow industry consolidation by settler corporations; and to negotiate in good faith with the Mi’kmaq Nation towards new nation-to-nation agreements that promote Mi’kmaw sovereignty and respect Mi’kmaw inherent and treaty rights to fishing.

Solidarity Kjipuktuk/Halifax supports the sovereignty of the Mi’kmaq and all Indigenous nations. Our protest of Clearwater Seafoods occurred prior to the announcement that a coalition of Mi’kmaw groups would purchase 50% of the company and is not commentary or position on the current deal. As a membership-based organisation that opposes both capitalism and colonialism, we are in a process of collectively making sense of this recent deal announcement within our membership and with friends and allies in Mi’kmaw communities.