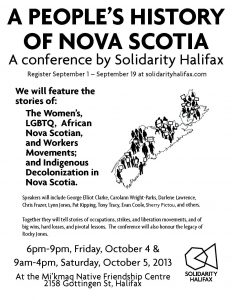 The conference united radical stories of resistance in Nova Scotia, and presented history as a site of tension, failure and change, not simply as an object for consumption. The conference honoured the particularities of our movements, while creating an opportunity to examine our struggles collectively from an anti-capitalist perspective. The conference also honoured the memory of Burnley “Rocky” Jones and featured The People’s Museum: a collection of activist artifacts and social movement paraphenalia from decades past to the present.

Knowing our legacy of left resistance in Nova Scotia will help us push further and harder in our current struggles.

Part 1: Stories of African Nova Scotian struggles for civil liberties and the legacy of Rocky Jones

Part 2: Stories from the LGBTQ, Women’s and Indigenous Decolonization movements

Part 3: Stories from the Canso Fishermen’s Strike, the Gottingen Street Occupation and from radical Cape Breton